Dale was enjoying life as a husband, father and Senior Vice President of Investments with Morgan Stanley, when his life would be detoured. He would be forced to have brain surgery due to a condition known as a Chiari Malformation. The surgery was successful in correcting the problem, but he would contract a deadly form of bacterial meningitis which would spiral into septic shock. His life threatening condition required a second brain surgery to save his life. Dale nearly died from the infection and two operations, but he would survive.

The aftermath, however, resulted in severe disabilities which would exact an enormous toll on his health. So much so that he would be compelled to step down from his career as a financial professional. His rehabilitation took years and would take every bit of resolve and determination he had. In Dale’s own words, “ I would experience a detour that would change my life forever.”

Up until his brain surgery and battle with meningitis, Dale would admit he worked far too much, leaving little time for family and friends. But all that changed as a result of his detour, leading him to a more balanced and fulfilling life.

I’ve learned that time is the one commodity that we cannot get back and that the way in which we choose to spend that time dictates our happiness.

Dale’s odyssey would include one more obstacle, discovering more recently that the blood flow in his brain was severely damaged from the surgeries and bacterial meningitis he had struggled with years earlier. The prognosis was an impending stroke or death. After much consultation, he was introduced to a renowned neurosurgeon. She gave Dale an option to have surgery that would restore the blood flow to the dying area of his brain. It was a high risk surgery with no guarantee of outcome, but Dale chose the surgery. The procedure was a success, hopefully giving him more quality years to live.

We welcome you to share Dale’s journey, a message of overcoming life’s detours, no matter what they may be.

His journey began as a young man growing up in a small town in Eastern Pennsylvania. The middle son of three, he grew up lower middle class. His father was a printer, his mother worked nights at a local bakery. He was taught hard work and discipline from an early age. He excelled at sports and music, from which he acquired his determination and desire to aim high in his expectations for life.

After graduating college with a degree in business, he was offered a position at a major financial firm at the age of 22. At the time he was the youngest financial adviser the firm had ever hired in the country. Dale was determined to succeed in a business world dominated by those with more experience, connections and acquaintances, of which he had none. For years, his hard work and dedication to his job and clients ultimately led him to his position as a Senior Vice President.

His success also led to him co-hosting the television show “Insights to Investing” for two years, on which he shared his knowledge with guests such as fortune 500 CEOs and other industry professionals. While at Morgan Stanley he honed his skill as a public speaker, presenting to companies such as Verizon, Stanley Black Decker, AT&T and many others. 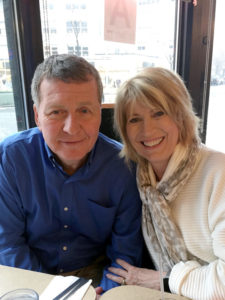 Dale resides in Pennsylvania with his wife Louann. They have been married for thirty eight years, have three children and five grandchildren. He is the author of Detour to Heaven, has appeared on the Dr Oz show and has spoken at numerous events and locations. He has been a school board director, a deacon at his church, and a volunteer and ambassador for the game of tennis. He and his wife love to exercise, travel and spend time with family.

This quote from Dale’s book summarizes the journey he and his wife have taken together.

We all will encounter detours and adversities in our lives. It is how we respond that determines the quality of our life going forward.